MongoDB version 3.4 introduced a new Aggregation stage, $facet, to enable developers to "create multi-faceted aggregations which characterize data across multiple dimensions, or facets, within a single aggregation stage". For example, you may run a clothes retail website and use this aggregation capability to characterise the choices across a set of filtered products, by the following facets, simultaneously:
In this blog post, I explore a way in which the response times for faceted aggregation workloads can be reduced, by leveraging parallel processing.

If an aggregation pipeline declares the use of the $facet stage, it defines multiple facets where each facet is a "sub-pipeline" containing a series actions specific to its facet. When a faceted aggregation is executed, the result of the aggregation will contain the combined output of all the facet's sub-pipelines. Below is an example of the structure of a "faceted" aggregation pipeline. 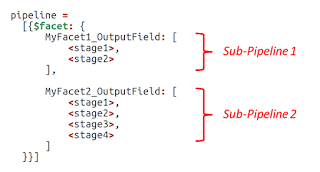 In this example, there are two facets or dimensions, each containing a sub-pipeline. Each sub-pipeline is essentially a regular aggregation pipeline, with just a small handful of restrictions on what it can contain. Notable amongst these restrictions is the fact that the sub-pipeline cannot contain a $facet stage. Therefore you can't use this to go infinite levels deep!

The ability to define an aggregation containing different facets is not just useful for responding to online user interactions, in realtime. It is also useful for activities such as running a business's "internal reporting" workloads, where a report may need to analyse a full data set, and then summarise the data in different dimensions.

A data set that I've been playing around with recently, is the publically available "MOT UK Annual Vehicle Test Result Data". An MOT is a UK annual safety check on a vehicle, and is mandatory for all cars over 3 years old. The UK government makes the data available to download, in anonymised form, for anyone to consume, through its data.gov.uk platform. It's a rich data set, providing a lot of insight into the characteristics of cars that UK residents have been driving over the last ten years or so. As a result, it's a good data set for me to use to explore faceted aggregations.


To analyse the car data, I created a GitHub project at mongo-uk-car-data. This contains some Python scripts to load the data from the MOT data CSV files into MongoDB, and to perform various analytics on the data set using MongoDB's Aggregation Framework. One of the Python scripts I created, mdb-mot-agg-cars-facets.py, uses a $facet stage to aggregate together summary information, in the following three different dimensions:
The following shows the result of the aggregation when run against the data set for years 2014-16 (a data set of approximately 113 million records). 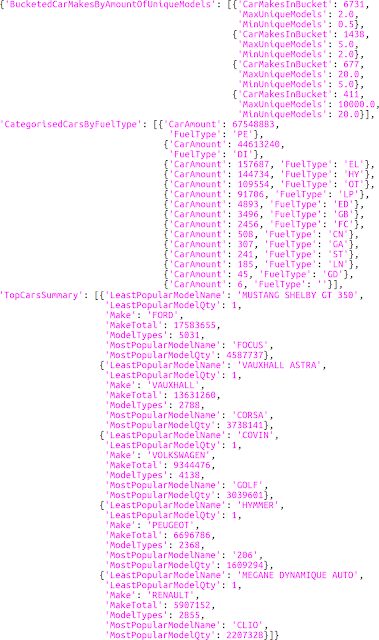 When I ran this test on my Linux Laptop (hosting both a mongod server and the test Python script), the aggregation was completed in about 5:20 minutes. In my test Python client code, a faceted pipeline is constructed, which uses the PyMongo Driver to send the aggregation command and pipeline payload to the MongoDB database. Significantly, the database's Aggregation framework processes each facet's sub-pipeline serially. Therefore, for example, if the first facet takes 5 minutes to process, the second takes 2 minutes and the third facet takes 10 minutes, the client application will only receive a full response in just over 17 minutes.

It occurred to me that there was a way to potentially speed up the execution time of this analytics job. At the point of invoking collection.aggregate(pipeline) in the mdb-mot-agg-cars-facets.py script, a custom function could be invoked instead, that internally breaks the pipeline up into separate pipelines, one for each facet. The function could then send each facet as a separate aggregation command, in parallel, to the MongoDB database to be processed, before merging the results into one, and returning it. Functionally, the behaviour of this code and the content of the response would be identical, but I hoped the response time would be significantly less. So I replaced the line of code that directly invoked the MongoDB aggregation command, collection.aggregate(pipeline), with a call to my new function aggregate_facets_in_parallel(collection, pipeline), instead. The implementation of this function can be seen in the Python file parallel_facets_agg.py. The function  uses Python's multiprocessing.pool.ThreadPool library to send each facet's sub-pipeline in a separate client thread and waits for all parallel aggregations to complete before returning the combined result.

This time, when I ran the test Python script against the same data set, I received the exact same result, but in a time of just 3:30 minutes (versus the original time of 5:20 minutes). This is not a bad speed up!  :-D

Some people may look at this and ask why, given that there were 3 facets, the aggregation didn't respond in just one third of the original time (i.e. in around 1:47 minutes). Well, there are many reasons, including:
The other question people may ask is, if this is so simple, why doesn't the MongoDB server implement such parallelism itself for processing the different sections of an aggregation $facet stage. There are at least two reasons why this is not the case in MongoDB:

I've shown an example in this blog post of how multi-faceted MongoDB aggregations can be sped up by encouraging parallelism, from the client application's perspective. The choice of Python to implement this was fairly arbitrary. I could have implemented it in any programming languages that there is a MongoDB Driver for, using the appropriate multi-threading libraries for that language. The parallelism benefits discussed in this post are really aimed at analytics type workloads that need to process a whole data-set to produce multi-faceted insight. This is in contrast to the sorts of workloads that would first match a far smaller subset of records, against an index, before then aggregating on the small data subset.

Song for today: Bella Muerte by The Patch of Sky

great article! Thanks for posting!