When I started my MongoDB Inc career 8 years ago, the 'bootcamp' project topic I chose for self-learning was to investigate how to speed up aggregations via parallelism. Specifically, I investigated the benefits of splitting an aggregation into parts, each running against a subset of the data concurrently. At the time, my study yielded a positive outcome by reducing the response time of a "full collection scan" style aggregation (see my original unsharded and sharded results and write-ups). However, in hindsight, running everything inside a single laptop dulled the impact. In reality, I was probably hitting host machine resource contention (e.g. CPU, RAM, Storage IOPS limits) in a way that wouldn't occur in a real distributed environment.

I thought I’d take the opportunity to revisit this topic:

“Can I improve the performance of a 'full-table-scan' type of aggregation workload by splitting the aggregation into parallel jobs, each operating on a subset of the data?”

This time, I chose to test against a database containing all the movies ever catalogued to calculate the average movie rating across all movies.

I decided to use a remote MongoDB cluster deployment for the test environment, with separate host machines for each replica/shard. Just because it is so easy to rapidly create a production-like environment, I used MongoDB Atlas to provision and host the database cluster. I’d expect to see similar results if I was to run the tests on equivalent hardware for any self-managed version of MongoDB.

I created a collection of 100 million ‘movie’ documents by duplicating records from the smaller sample_mflix database sourced from the Atlas sample data set. Approximately ⅓ of the documents in the movies collection have a field called metacritic which provides an aggregated movies rating across many reviews collated by the Metacritic website.

Below is an example of a movie document, from the collection, for one of my favourite films, Drive: 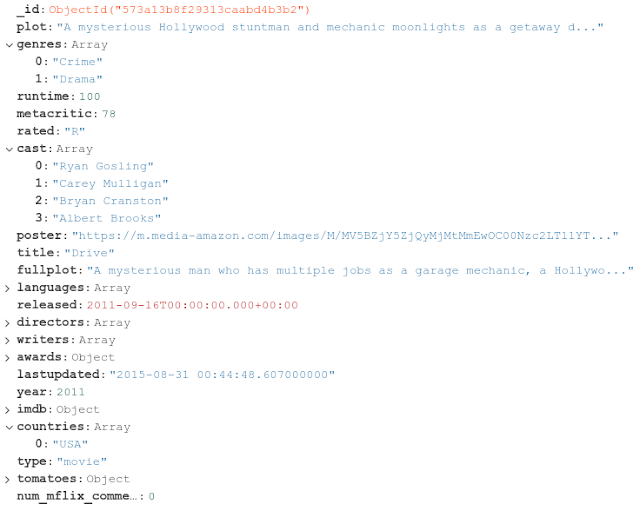 I wanted to compute the average metacritic score across every movie in the database collection. Using the MongoDB Shell (mongosh), I am able to execute the following aggregation pipeline to calculate the average rating across all movies:

I then wrote a small Python test utility called Mongo Parallel Agg to achieve parallelism and test the outcome quickly. This utility analyses the movie data set, divides the data set into sections (e.g. 8 parts), and then spawns multiple sub-processes. Each sub-process runs in parallel, targeting one of the subsections of data.

MongoDB has a handy tool for working out the approximate “natural split points” for a given data set, which is the $bucketAuto aggregation operator. The mongo-parallel-agg app uses $bucketAuto to perform an operation similar to the following to understand the shape of the movie data set and identify its subsections (in this case asking for 8 approximately balanced subsections of the titles of movies):

As you can see from these results, it's important to analyse the spread of values in a collection to determine its natural divisions. A naïve approach would be to manually divide all the movie titles by their initial letter in the English alphabet (e.g. A-Z). With 26 letters, if you need 8 subsections, you might naïvely split at every 3rd or 4th letter (26 ÷ 8 = 3.25). You would come up with subsections such as "A-C", "S-U", etc. However, as you can tell from the $bucketAuto output above, each subsection would not be evenly balanced for the number of documents it covers. Many more movies begin with the letter "T" than other letters due to titles like "The …". Using uneven subsections of documents for parallel aggregations results in some sub-processes taking far longer than others, prolonging the overall response time of the entire aggregation workload.

The other main 'trick' the mongo-parallel-agg app pulls is to use the identified subsections information to produce multiple aggregation pipelines, one for each sub-process, targeting just a subset of the collection. The aggregation excerpt below provides an example of the pipeline dynamically generated by mongo-parallel-agg to target a subsection of data to help with calculating the average rating:

As you can see, the pipeline uses a $match stage to target a subsection of the data for analysis. The other main change is that the pipeline no longer uses the $avg operator to calculate an average. Instead, the pipeline includes two computed fields, one for the total and one for the count, which each use the $sum operator. This change is required because, mathematically, calculating an average of averages will yield an invalid result. In this solution, the mongo-parallel-agg Python code performs the "last-mile" average computation by summing the totals produced by each sub-process. It then divides this grand total by the sum of all the counts calculated by each sub-process to determine the average. Also, you'll notice that the pipeline must handle ignoring documents for the count field if the field (metacritic) doesn't exist in a document (the previously used $avg operator automatically did this and so there was no need for a check).

To optimise each sub-process pipeline, the mongo-parallel-agg app first ensures a compound index exists for title & metacritic. This enables the $match part of the pipeline to target the index. It also enables the aggregation to be covered for increased efficiency because the only other field analysed (metacritic) belongs to the same index.

Purely for convenience, the mongo-parallel-agg demo app performs these two actions every time it executes before running the main aggregation workload against the collection (i.e. performing $bucketAuto analysis and ensuring an index exists). In a real production system, both these actions would be performed once or infrequently and not every time the aggregation workload runs. For this reason, the app doesn't start its aggregation execution timer until after it completes these two actions.

The following table shows the execution times, in seconds, for an aggregation computing the average movie rating when run against different host environment topologies with varying levels of parallelism:

So why is there a jump down of at least 6x lower latency when going from a single process to two parallel sub-processes to calculate the average movie rating for all movies?

Having run all the tests, I investigated deeper and realised why this phenomenon occurred. I'd initially optimised the mongo-parallel-agg app when splitting an aggregation into multiple pipelines, to each performing a $match for a subset of data. I’d realised that each pipeline was no longer performing a "full collection scan" and would benefit from an index on the title field being used by the $match filter. Additionally, I’d realised that the only other field used by these "split aggregations" was the metacritic field from which the average is calculated. Therefore, rather than using a simple index on title, I’d employed a compound index on title & metacritic to cover the query part of the aggregation. Consequently, each aggregation sub-process was able to fully leverage an index and didn’t need to scan each full document (so full documents were not pulled from disk). Also, the index is far smaller than the full collection's size, and therefore, the database can rapidly serve the index’s data from RAM.

During the tests, I’d not considered whether I could apply some of these same benefits when just running the entire aggregation pipeline as a single process. It was only later that I realised I could also optimise the original “full-collection” aggregation with a small “hack”, inspired by how I’d originally optimised the divided pipelines for sub-processing. Upon testing this hack for just the M60 two-shard configuration (single process), I obtained the following results:

My hack involved refactoring the aggregation pipeline that the application generates for the single-threaded processing option, as shown below:

Using the “filter documents greater than MinKey” hack, I saw that the aggregation performs an index scan rather than a full-collection scan. The runtime invariably pulls this [far smaller] index from RAM rather than disk. The aggregation is covered, locating all the required title and metacritic values from the index with no need to examine each underlying document in the collection.

Interestingly, before including my hack, I first tried defining just a simple index on metacritic and using a hint to force the “full aggregation” to use this index for a covered query. However, this didn’t yield any performance benefits and it was even slower.

Unfortunately, I’d run out of time to re-test all the deployment scenarios with this improved single-process pipeline. Therefore, the results table reflects the original results before this final improvement. I have since folded the code refactoring into the Github codebase for the mongo-parallel-agg project so that others can leverage this optimisation in the future.

Also, upon reflection, instead of using the “match documents greater than MinKey” filter in a new $match stage, I suspect I could probably use something like the $exists operator instead in the new $match stage. My guess is this would also ensure the aggregation pipeline leverages the compound index, and as a covered query, rather than performing a full collection scan. Additionally, it may also be the case that using a sparse index or compound index provides further improvement for all the aggregations executed, whether parallelised or not (to be determined). I will leave these two elements for the reader to test.

EDIT: 7-Dec-2021: Prompted by a colleague, Chris Harris, I tried employing the hint mechanism again since publishing this blog post. This time, using a hint did work, and the single-threaded aggregation leveraged an index as a covered query. On the previous occasion I'd tried this, I suspect I'd introduced a typo when referencing the index from the hint. In conclusion, there appears to be a few different options for inducing an index scan and covered query to occur. For the background on why you explicitly have to force an index scan to be used, rather than a collection scan when there is no find()/$match filter defined, review the server ticket 20066.

I've shown here that, for a specific aggregation, I can reduce the time taken to calculate the average rating across 100 million movies on "mid-range" hardware by two orders of magnitude. I achieved this by scaling vertically (adding more CPUs), scaling horizontally (adding more shards), and by increasing the number of processes run in parallel. Also, some pipeline tweaking and index tuning helped.

These findings don't guarantee that every type of aggregation workload will scale to the same degree, or even at all when applying similar configuration changes. The impact will depend on the nature of the aggregation pipeline.

I'd be remiss not to recommend that before trying the scaling optimisations outlined here, you should first ensure you have optimised your aggregation pipeline more generally. Scaling comes with an increased infrastructure cost which can often be avoidable. Also, the act of running more sub-processes for each aggregation could drain computation power you’d previously “allocated” to other types of workloads running against the database. My book, Practical MongoDB Aggregations, and specifically the following sections, outlines some of the techniques to use to optimise your aggregations without applying scaling changes:

Lastly, is the obvious question about whether I believe it is possible for the movie average rating calculation to take less than one second to complete for 100 million movies? The answer is absolutely yes, with sufficiently increased CPUs, RAM, storage IOPS, shards and parallel sub-processes. However, I suspect it may be a while before I find out for sure because the required uplift in hardware is likely to be cost-prohibitive for me at least.

Song for today: Carol by The Peep Tempel
Posted by Paul Done No comments: