People who have worked with me recently are probably bored by me raving about how good this book is: Designing Data-Intensive Applications by Martin Kleppmann (O'Reilly, 2016). Suffice to say, if you are in IT and have any sort of interest in databases and/or data-driven applications, you should read this book. You will be richly rewarded for the effort.

In the second chapter of the book ('Data Models and Query Languages'), Martin has a section called 'Graph Like Data Models' which explores 'graph use cases' where many-to-many relationships are typically modelled with tree-like structures, with indeterminate numbers of inter-connections. The book section shows how a specific 'graph problem' can be solved by using a dedicated graph database technology with associated query language (Cypher) and by using an ordinary relational database with associated query language (SQL). One thing that quickly becomes evident, when reading this section of the book, is how difficult it is in a relational database to model complex many-to-many relationships. This may come as a surprise to some people. However, this is consistent with something I've subconsciously learnt over 20 years of using relational databases, which is, relationships ≠ relations, in the world of RDBMS.

The graph scenario illustrated in the book shows an example of two people, Lucy and Alain, who are married to each other, who are born in different places and who now live together in a third place. For clarity, I've included the diagram from the book, below, to best illustrate the scenario (annotated with the book's details, in red, for reference). 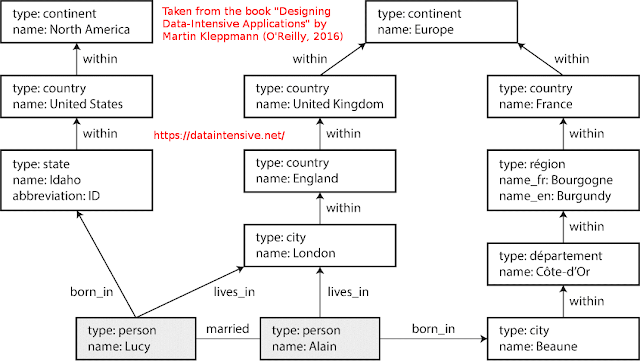 Throughout the book, numerous types of databases and data-stores are illustrated, compared and contrasted, including MongoDB in many places. However the book's section on graph models doesn't show how MongoDB can be used to solve the example graph scenario. Therefore, I thought I take this task on myself. Essentially, the premise is that there is a data-set of many people, with data on the place each person was born in and the place each person now lives in. Of course, any given place may be within a larger named place, which may in turn be within a larger named place, and so on, as illustrated in the diagram above. In the rest of this blog post I show one way that such data structures and relationships can be modelled in MongoDB and then leveraged by MongoDB's graph query capabilities (specifically using the graph lookup feature of MongoDB's Aggregation Framework). What will be demonstrated is how to efficiently answer the exam question posed by the book, namely: 'Find People Who Emigrated From US To Europe'.


To demonstrate the use of MongoDB's Aggregation 'graph lookup' capability to answer the question 'Find People Who Emigrated From US To Europe', I've created the following two MongoDB collections, populated with data:
Similar to the book's example, amongst the many 'persons' records stored in MongoDB data-set, are the following two records relating to 'Lucy' and 'Alain'.

Below is an excerpt of some of the records from the 'places' collection, which illustrates how a place record may refer to another place record, via its 'part_of' attribute.

If you want to access this data yourself and load it into the two MongoDB database collections, I've created JSON exports of both collections and made these available in a GitHub project (see the project's README for more details on how to load the data into MongoDB and then how to actually run the example's 'graph lookup' aggregation pipeline).

The MongoDB aggregation pipeline I created, to process the data across these two collections and to answer the question 'Find People Who Emigrated From US To Europe', has the following stages:

The actual MongoDB Aggregation Pipeline for this is:

When this aggregation is executed, after first declaring values for the variables highlighted in red...

...the following is an excerpt of the output that is returned by the aggregation:

On my laptop, using the data-set of a million person records, the aggregation takes about 45 seconds to complete. However, if I first define the index...

...and then run the aggregation, it only takes around 2 seconds to execute. This shows just how efficiently the 'graphLookup' capability is able to walk a graph of relationships, by leveraging an appropriate index.


I've shown the expressiveness and power of MongoDB's aggregation framework, combined with 'graphLookup' pipeline stages, to perform a query of a graph of relationships across many records. A 'graphLookup' stage is efficient as it avoids the need to develop client application logic to programmatically navigate each hop of a graph of relationships, and thus avoids the network round trip latency that a client, traversing each hop, would otherwise incur. The 'graphLookup' stage can and should leverage an index, to enable the 'tree-walk' process to be even more efficient.

Although MongoDB may not be as rich in terms of the number of graph processing primitives it provides, compared with 'dedicated' graph databases, it possesses some key advantages for 'graph' use cases: