I've just released the latest version of DomainHealth - version 0.8 (well actually 0.8.1 because of a fix for a last minute bug spotted by Kris).

DomainHealth (DH) is an open source "zero-config" monitoring tool for WebLogic. It collects important server metrics over time, archives these into CSV files and provides a simple web interface for viewing graphs of current and historical statistics.

You can download it from the project home page at http://sourceforge.net/projects/domainhealth. 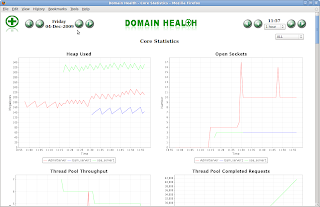 This release includes many minor fixes and enhancements (see the Release Notes document listed alongside the DH download file), plus the following major additions:

Song for today: Touched by VAST
Posted by Paul Done