Now that Exalogic has been released, the main Exalogic documentation is available at: http://download.oracle.com/docs/cd/E18476_01/index.htm
Worth particular attention is the "Machine Owner's Guide" and the "Enterprise Deployment Guide".
The Machine Owner's Guide will give you a good idea of the machine's internal specifications as well as the unit's external dimensions, power consumption needs, cooling needs, multi-rack cabling configurations, etc.
The Enterprise Deployment Guide (EDG) will point you in the right direction if you want to install and configure the Application Grid products on Exalogic in an optimal way for performance and highly-availability.
If you are about to take shipment of Exalogic and need copies of the software, then these can be accessed from the Oracle eDelivery website, using the following steps:
The Exalogic downloads include:
Song for today: Cause = Time by Broken Social Scene
Posted by Paul Done 4 comments: 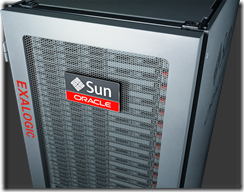 Just in case you've somehow missed the buzz and haven't got a clue what Exalogic is, I'll describe it for you a little here...
Exalogic is an integrated hardware and software system that is engineered, tested, and tuned to run enterprise Java applications, as well as native applications, with an emphasis on high performance and high availability (HA). Exalogic incorporates redundant hardware with dense-computing resources, ZFS Shared Storage and InfiniBand networking. This hardware is sized and customised for optimum use by Oracle 'Application Grid' software products, to provide a balanced hardware/software system. Specifically, the WebLogic Application Server, JRockit Java Virtual Machine (JVM) and Coherence In-Memory Data Grid products have been enhanced to leverage some of the unique features of the underlying hardware, for maximum performance and HA.
If you are familiar with Exadata and it being the "database machine", then think of Exalogic as the "middleware machine". Physically linking the two together in a data-centre gives you the foundation for a very high-end Enterprise Java based OLTP solution.
Exalogic is a system rather than appliance, where users are able to install, develop or run what they want as long as it is Linux/Solaris x86-64 compatible. Even though some of the elements of Exalogic, like InfiniBand, are more often found in the supercomputing world, Exalogic is intended as a general purpose system for running enterprise business applications. Exalogic will just appear to the hosted applications as a set of general purpose operating systems and processors with common standards-based networking. This means that unlike the supercomputing world, developers don't have to create bespoke software specifically tailored to run on a high-end proprietary platform.
For further information, see the Oracle introduction to Exalogic whitepaper.
Song for today: Whipping Song by Sister Double Happiness
Posted by Paul Done 2 comments: